In May l will be traveling with my mother to Europe for her birthday celebration. We have both traveled extensively to Europe before but each time we visit a few new locations. One of my mother's favorite places is Venice and we have experienced all types of weather conditions in this beautiful city. At times I can certainly verify that Venice is indeed sinking.

Below Venice after Alta Aqua "high water" in December 2009. 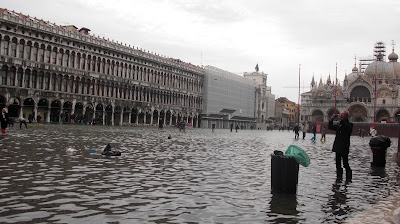 Some my of my favorite places are Karlovy Vary, Buenos Aires, and Lake Como.

This year we are excited to be visiting Reykjavik, Iceland for the very first time. The weather there may be wet and cloudy or wet and sunny. I have been reading reviews and posts about Reykjavik and the mention of "water pants" has me a little worried! After our brief two nights in Iceland we will dry out and fly to the UK for an overnight in advance of boarding the Crystal Symphony in Southampton on May 21, 2012.


This will be my first cruise on Crystal. My "parents" cruised on the Crystal Harmony (refurbished and renamed Asuka II) in the early 1990's. My mother traveled with a gentleman (not my actual father) on the cruise. He worked for the U.S. government and elected not to include his name in the distributed passenger guest book. Once on board he had my mother study it in case there was anyone she knew. He had the crew address them as Mr. and Mrs. X (taking my father's name). I know it all sounds a little odd but for someone who had a barber in every port (he was bald), not so much! They did have a wonderful cruise together from Miami through the Panama Canal and my mother has very fond memories of Crystal. Therefore it is exciting after so many years for my mother to celebrate her birthday on board Crystal but also not to have to scrutinize the guest list! 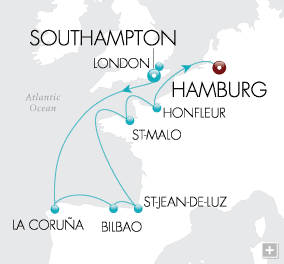 Gregg Michel, Crystal's president and his wife Adriana will be cruising on this voyage. Crystal will provide some special events during this cruise which will be announced on board. The featured speaker on the cruise is General Anthony Zinni who was head of CENTCOM. My mother does love a man in uniform so hopefully he will be insightful as well as entertaining. 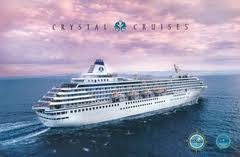 Crystal is known as one of the more formal cruise lines. As my closet is not stocked with YSL and Dior, I wondered after booking this cruise what I had gotten myself into. However, my fear of having to shop for more expensive attire was alleviated by doing research on Cruise Critic and seeing photos of Crystal passengers on board the ships. I am not a fashionista by any stretch. However, I have studied the Crystal dress code carefully and hopefully will not be an eyesore. On this voyage there are 2 formal nights, 2 informal nights and 6 casual nights. I was both delighted and surprised to see the high number of casual nights. Bear in mind this does not mean Jeans and gym clothes. I am more comfortable when all passengers dress appropriately. I have been on cruises during formal night where the sight of shortsleeve shirts, polos and sundresses greatly detracts from our overall enjoyment. My personal preference is for the Country Club Casual dress code on Oceania. It works prefectly. There are no formal nights and you don't have to remember what the dress code is for each evening.

My other main concern about Crystal was the assigned seating. Quite honestly I can't imagine having to subject the same tablemates to our friendly banter every night of the cruise. I am not implying my mother and I are not good conversationalists or entertaining. Others have commented that when my mother and I get together it can resemble a Sitcom. Basically, the thought of assigned seating was a huge turn off as was an early seating at 6:15 pm. I like dining early but do not want to rush to dinner after returning to the ship from a shore excursion. The later seating at 8:30 pm was even less appealing. Thankfully, Crystal recently instituted Open Seating By Reservation. After final payment is processed, you can go online and book the preferred times for the Crystal dining room each night. You can also book online one night in each of the speciality dining venues Prego and Silk Road at no additional charge. If you want to dine more than once in these two restaurants you can request it once on board the ship.


I am very impressed with the Crystal PCPC (Priority Check-in and Planning Center). You can book the dining times each night of the cruise in advance and it also shows what the dress code will be each evening. Brilliant! Shore excursions can be booked from the PCPC at no charge online. It will be billed on the ship. This is a huge advantage to the mass market lines where you have to pay for the excursions and specialty dining when making the booking on the website.

We will be doing a combination of Crystal shore excursions and private ones during this voyage. The price of the Crystal excursions does appear a little higher though than what I am used to. For instance, a bus transfer (no tour) of 50 minutes each way from the ship and back is $91 in one port. For this destination we have elected to take the train instead (5 euros each way per person plus a taxi to and from the train station). I will be posting the full excursion details as we travel to each port.


My final hesitation and greatest detraction about cruising on Crystal is that they still allow smoking in the rooms (but not on the veranda). I do not appreciate smoke and have greatly enjoyed the strict policies on Oceania and Celebrity where smoking is almost prohibited. I have been assured that it is rare to have a problem with smoke on Crystal. In fact Crystal recently announced they will also prohibit smoking in a few more of the public rooms. But as Crystal is a wholly owned subsidiary of NYK, a large Japanese shipping conglomerate, it will most likely be the last line to eliminate smoking in the staterooms. Hopefully everything will turn out as we have anticipated.

Now in only a few more weeks we will be on our way!