By now my internal clock is perfectly in sync with the early Icelandic sunrise. Unfortunately we are checking out today and have a very early departure. As the executive lounge is not open this early (4:30 am) we choose to skip breakfast. The main restaurant downstairs charges $26 USD which doesn't seem worth it. I checked out of the hotel and had Gunnard do the processing. He also had checked us in. He has absolutely no personality, no emotion, and cannot even crack a smile. The other people at the desk are quite nice though.

Our taxi driver was waiting for us at 5:30 am. We made great time and were at Keflavik airport in only 30 minutes, (about 15 minutes early). The taxi was expensive, about 19,000 ISK. However, it was much better than taking the Flybus. We had checked in online with Icelandair the day prior so we just had to go through security and wait for the flight to depart. As in Boston, there was no monitoring of the carry-on baggage weight

We looked in the duty free shops and saw many of the same items for sale in Reykjavik and at the Blue Lagoon. We are usually good shoppers but the only item I came away with (literally) is the logo pen that I kept at the Blue Lagoon to sign the lunch receipt. Hopefully we will do better in the cruise ports. The flying time from Reykjavik to Heathrow is less than 3 hours. We boarded the plane and this time economy felt a little more comfortable even though it was another 757-200 aircraft.


We departed 5 minutes early and took a southerly route over Iceland. The ground is very brown and there is very little vegetation. I imagine it must look nice in the winter. 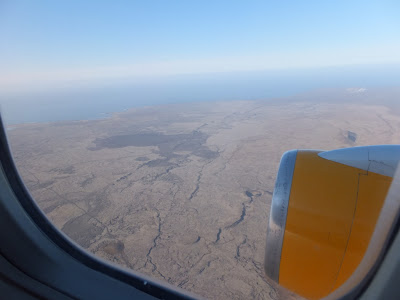 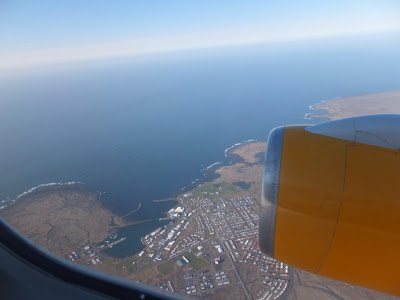 The flight was great and I watched a very strange Icelandic movie about a women who gets a job doing role playing (i.e., ninja warrior stuff) with some geeks from a comics shop while her boyfriend escapes from prison and tries to access his money in the Cayman Islands. Needless to say I didn't finish watching it. I glanced out the window for a while from seat 12F. The inflight direction information stopped working halfway into the flight on the right side of the plane. However, it was possible to tell we were flying over England and it was nice to see the green landscape after two days of brown/black lava covered ground in Iceland. Heathrow had a ground delay so we had to circle for 20 minutes. Immigration took over an hour and was painful. When we exited I could not locate our driver so I called Airport-London-Pickps and they said it would be 5 minutes before the driver returned to the terminal. They expected us sooner as we only had carry-on and immigration is usually only 30 minutes.

The driver appeared shortly thereafter and was very nice. We proceeded to the car and entered the motorway for the one hour drive to Southampton. We have spent time in the UK before but there are many places we have not been. I considered spending our overnight in Bath, Hampshire, Costwolds and even the Channel Islands. Last year we spent the night in Cambridge, where my cousin is a Professor of the History of Science.

Ultimately I decided to spend the night on the Isle of Wight due to its historic nature and being conveniently located near Southampton. I think it is fair to say that the IOW is not exactly on the radar of many UK visitors or in fact many of its citizens. I made my determination to visit as it is only 25 minutes by fast ferry from Southampton, is easily accessible and has historical significance as the former home of Queen Victoria.


The Isle of Wight is now far removed from its heyday as the stomping grounds of poet Alfred Lord Tennyson, writer Charles Dickens and philospher Karl Marx. Currently the major industry on the Island is tourism. It does have an interesting history as the home of the world's first Hovercraft and where they conducted testing and development of the Britain's space rockets. Huh, the UK had a space program? During WWII the IOW was instrumental in supplying a fuel pipeline that supported the invasion of the Normandy beaches. It was called PLUTO (Pipeline Under the Ocean) and went from Shanklin, IOW to Cherbourg, France from June 12, 1944.

The Isle of Wight used to be part of the county of Hampshire and has a current population of approximately 132,000. It is represented by a single Member of Parliament (MP). Until 1995 the Island had its own Governor. Lord Mountbatten served in this role from 1969 to 1974. 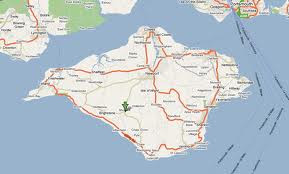 On Sunday's the Red Funnel FastJet Ferry departs every hour at 45 past. We only had 2 minutes to spare to catch the 1:45 pm ferry from the dock in Southampton. We made it and had a fun 25 minute trip across the Solent. The ferry travels at up to 40 knots! We arrived in West Cowes and made our way down (10 minutes) to the Floating Bridge. It was a little tricky to find our way. I stopped to ask a lady with a little parson terrier for directions. I am not passing judgement but next time I need to look more carefully as this lady who appeared to be about 60 years old had white and bright blue streaked hair. She also had several piercings. However, more importantly she was very exacting with her directions. We finally made it to the floating bride. This bridge has had several incarnations and is the means for foot and car passengers to travel over the River Medina from West Cowes to East Cowes. The floating bridge (also known as the chain bridge) departs every 10 minutes and takes only 5 minutes to get to the other side. There is a charge for car passengers but not foot passengers. This is one of the few places in the UK where they have not built an actual bridge linking the two sides. It is hard to understand why they have done so as the distance is very close. I could easily swim it.

Depiction of Cowes Floating Bridge circa 1896 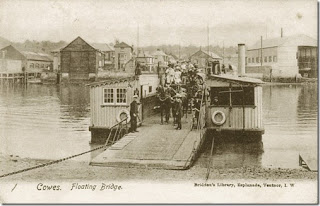 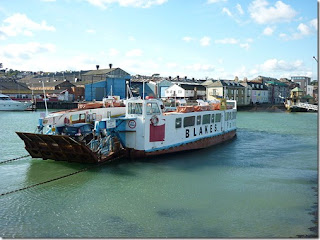 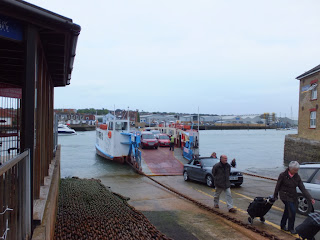 Once on the other side it was only a 15 minute walk to the hotel but my mother was getting tired of rolling her bag up and down the streets (I can't blame her - I am delighted she made it this far) so we called the hotel and they sent a taxi to pick us up. We were very close and it only cost 3 pounds. 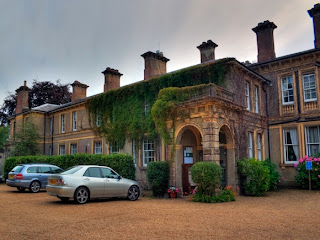 The Albert Cottage Hotel used to be part of Osborne House, Queen Victoria's stately home. It was constructed in the mid 1800's and was turned into a hotel only recently. There are 10 rooms on two floors and they have a full service restaurant. We checked in and were soon shown to our room on the first floor. Our room (Prince's category) had twin beds but it was not adequate (the beds were so low we would have almost been sleeping on the floor) so we requested to change rooms and were accommodated. The second room was very nice had a nautical theme.  It was for a family category room so it was very spacious. We were tired of sitting all day and were also hungry so we decided to take a walk to Osborne House and visit their cafe. The hotel has a very tranquil setting. 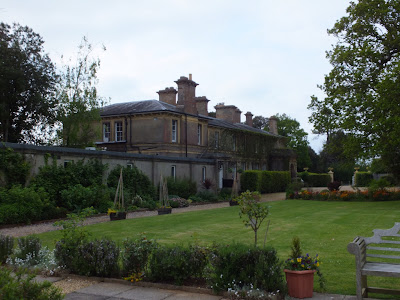 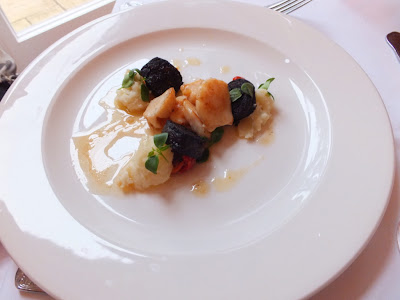 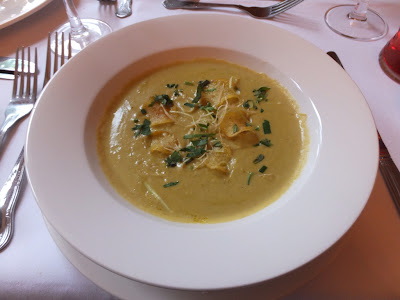 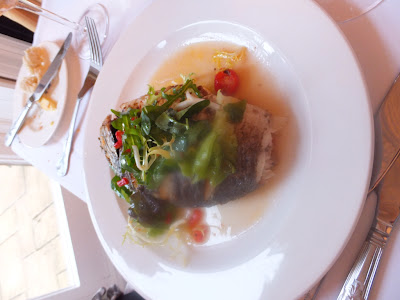 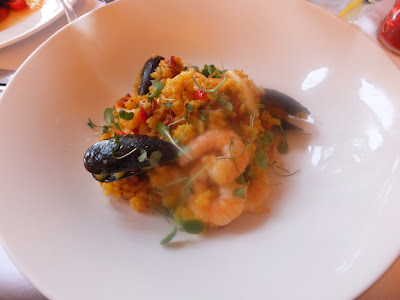 After dinner we rested in the room. The hotel advertises free wifi but there wasn't any. I was very disappointed. As we were very tired anyway we wisely called it a night.
﻿