It was overcast when we woke and frankly didn't look much different from a few hours ago. It is amazing Icelanders can remember what day it is. We went to the Executive Lounge for breakfast. They had the same choices as yesterday. After a nice relaxing breakfast we went to the lobby to look for our pickup bus.

Today we are joining Iceland Excursions for the Icelandic Horse and Blue Lagoon tour. I booked online and it cost 22,000 ISK per person plus the entrance fee to the Blue Lagoon. We decided not to do the Golden Circle tour as we would be sitting on the bus for most of the time and the only site I was interested in seeing is the Gullfoss waterfall. Perhaps we will do the Golden Circle next time.

Yesterday we received a note that our pickup time would be at 8:30 am instead of 9:00 am. We didn't see anyone in the lobby with a sign so we walked outside and asked one of the bus drivers who pointed to the bus behind him. We were not on the list but decided to take the first bus and drove to two more hotels to pickup more people before we arrived at the ticket office. The van for the Ishestar stable was out front so I my mother wait in the van while I traded in the voucher for printed tickets.

My mother promised herself several years ago after she survived our riding adventure in Patagonia (it was very muddy, rocky and the horses kept stumbling and you had to keep ducking below tree branches) that she would never get on another horse again. My mother was a rider in her youth and had her own horse for several years at summer camp. I respected her decision not to put herself in a situation where she did not feel comfortable. Nonetheless, I was hopeful she would change her mind once she saw the gentle Icelandic horses. 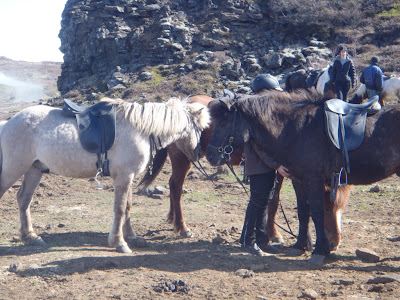 The Icelandic horse weighs between 730 to 840 lbs and is an average of 13 to 14 hands high. They resemble a pony more than a horse. However, the Icelandic language being "purist" has no word for "pony". The horses have a double coat which protects them from extreme temperatures. They shed the double coat in the spring.

The Icelandic has five gaits: walk, trot, canter, tolt and flying pace. The last two are specific to the Icelandic breed. The tolt is a four beat lateral gate similar to the running walk of the Tennessee Walking Horse. It is interesting that the tolt is a natural gait from birth and the Icelandic horse is not taught how to do this. The Flying Pace is used for racing, and as it sounds, is very fast. This gait is more specialized and is not as common among the breed. Hope we are not doing that one. The Icelandic horse is most famous for the tolt.

There were 26 riders in our group plus a leader and 4 assistants. We watched an instuctional video which was well done and explained how to hold the reins and how to treat the horse (no loud noises and no kicking) We were lead into the barn and choose helmets. The leader helped select who would get which horse starting with the 2 children and then the experienced and beginner riders were lined up and given a horse. The Icelandic horses are adorable! They are very sweet and friendly too. We walked the horses outside and were instructed not to get on until they told us to. I had a white horse named Freiya who seemed a little sleepy but she was well mannered. 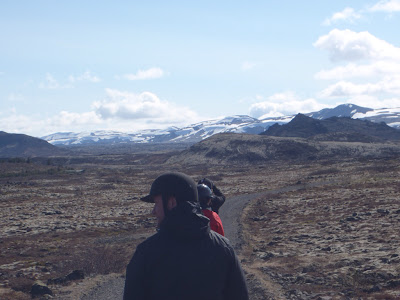 We were helped onto the horses (including my mother) and followed in single file. Talk about snout to tail - the horses were very close to one another. We were told they feel more comfortable that way. The ride took us on mostly flat terrain for about 90 minutes. The scenery was pretty with the mountains in the distance. I think we were walking on what appeared to be a lava field. There were no flowers and we didn't see any birds. It felt a little barren. At the halfway mark we entered a clearing and told to dismount so the horses could rest. They are very good to the horses. During the break I was told by one of the guides that Ishestar has 130 horses at the stable and another 1000 around the rest of the country. Of the 4 guides, one was from Finland and another from Denmark.

﻿﻿ ﻿﻿ We were offered the opportunity to join the medium group where we could tolt and walk. Only a few people joined. My horse was still sleepy and I also thought I should stay with my mother so I remained in the slow group. As the horses got spread out a little on the ride back I did get a chance to tolt for a few minutes. It felt like a combination of a trot and a canter. It was very smooth and relaxing. The United States features two primary riding styles: Hunt seat, which is more English where you are positioned forward; and Balance seat where you are more in tune with the horse's movement. I prefer balance seat as you don't have to be propped out of your seat and post while riding. The tolt was perfect for the balance seat aficionado. 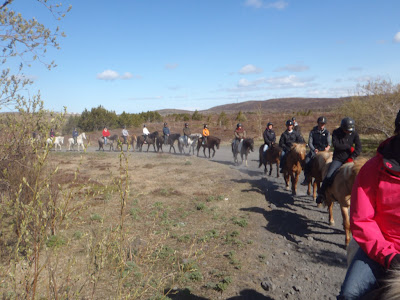 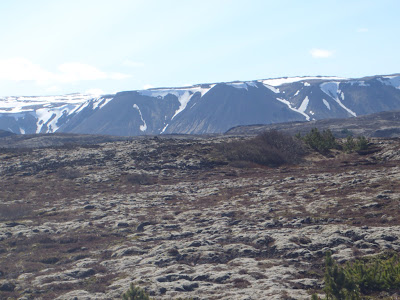 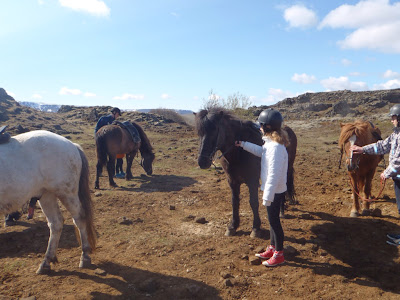 My mother enjoyed her ride and only did walking which for her was sitting. She said her horse had a lot of spunk but was very responsive. He had bangs and to me strangely resembled Justin Bieber. The ride was our highlight for our trip to Reykjavik.

At 1:00 pm We boarded the bus for the 45 minute drive to the Blue Lagoon. It was a nice drive and I was more awake to admire the scenery than yesterday morning. We entered the building and paid the entrance fee 30 euros per person plus 5 euros each for a nice fluffy towel (rental). We were given a plastic bracelet (which kept falling off) that activated the locker. I decided to pay in Icelandic as the conversion seemed more favorable. All guests are required to shower before entering the lagoon. There is a large communal shower (separated by gender) and private stall cubicles to the side . Sadly I do not have a body like Rihanna and being rather modest, I chose the cubicle. My mother decided to do the communal shower. We changed into our swimsuits, stored our items in the locker and proceeded to the Lagoon outside.

The outside temperature was very cold but we waded in. The water was nice and warm and the bottom of the lagoon is kind of mushy. The water in the lagoon is replaced every 40 hours and it seemed very clean. 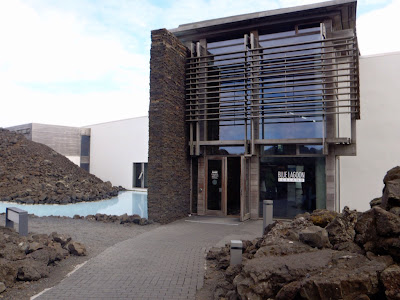 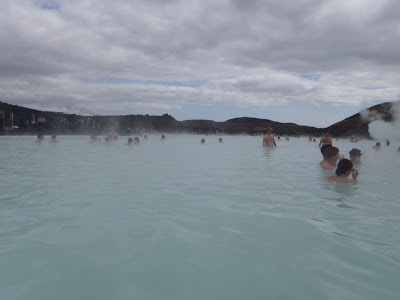 The Blue Lagoon is one of Iceland's great tourist attractions. It was actually created by accident when super heated water and steam escaped from the Svartsengi Geothermal Power Station and flooded the lava field. Locals realized that the water and minerals had curative powers so in the 1980's the Blue Lagoon was open to the public. 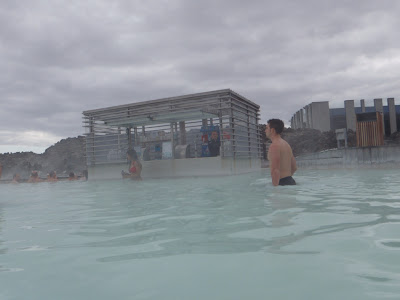 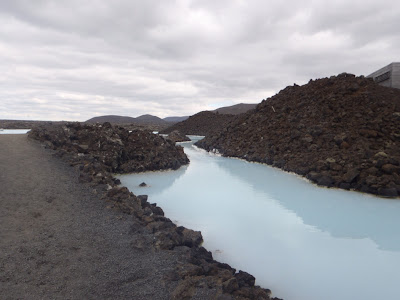 The water was does not get below 99 F. The blue color is a result of minerals and blue/green algae in the water and on the surrounding lava rocks. It really felt great on my muscles after 90 minutes of riding plus sitting on the bus. We stayed in for about an hour. I made sure to tie my hair up as I read that the minerals can damage it. I didn't do such a good job and the ends up dangling in the water. It was curious that there were several groups of men in the lagoon. Perhaps they come to Iceland for stag parties? I am afraid Some of their language was not suitable for my puerile upbringing.

It was way past lunch time by now so we decided to get a snack. There are options at the Blue Lagoon. 1) Cafe 2) Lava restaurant and 3) Pool bar. We decided on the Lava restaurant which seemed to be a bad choice as the service was unbearably slow. It does overlooks the lagoon so at least we got a view while we waited and waited for the food to arrive. Mother had the seafood soup and I had a cheeseburger. She said the soup was delicious. 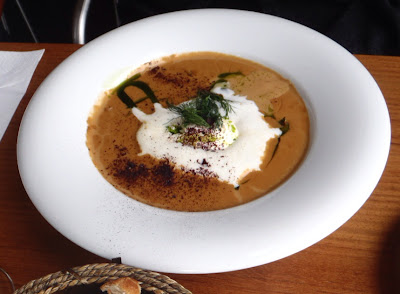 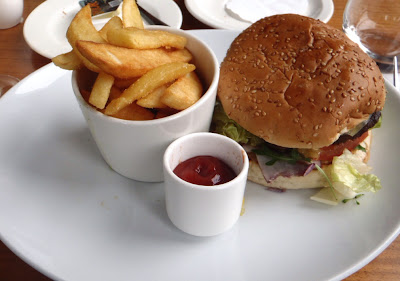 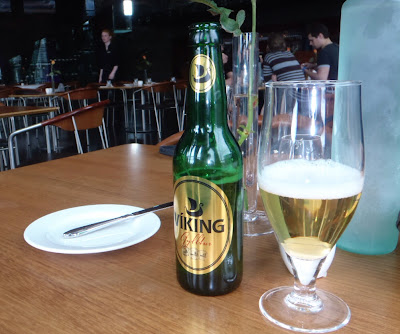 We looked in the shop at the Blue Lagoon products which are also available at the airport. We decided not to buy anything although they had merchandised everything quite nicely.
We had arranged with the excursion driver to be picked up at 5:15 pm to go back to the hotel. We went outside for our rendezvous with the driver for the ride to the Hilton. Thankfully we were the first drop off point after leaving the lagoon. The drive back took about 40 minutes.

We had dinner reservations at 8:00 pm downtown at Tapasbarinn. That gave us almost 2 hours to relax in our room at the Hilton and also get ready for dinner. I used the free wifi to download photos and check email again. I am not looking forward to having to pay for the Internet once on the ship.

The Hilton shuttle dropped us off not far from the restaurant. It is a nice looking building with several rooms. We were seated at a table on the end in a quite area and were warmly greeted. As the name implies, Tapasbarinn serves tapas. The owners are from Spain but they also serve a variation of Icelandic dishes. We like ordering small plates instead of a big dinner so this restaurant suited our needs perfectly. We ordered 4 dishes and shared a dessert. The meal was good but not great. 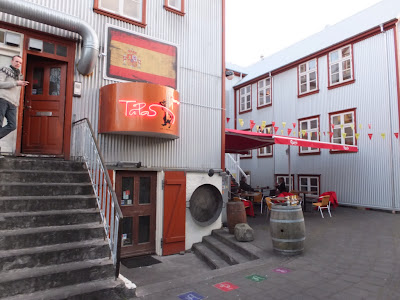 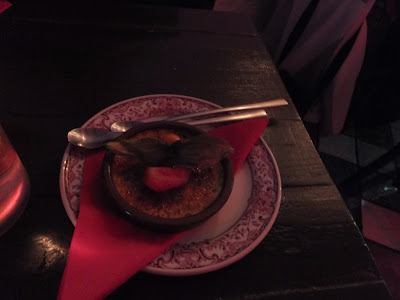 After dinner we took a walk around the historic waterfront and then to the Harpa again before returning to the pickup spot for the shuttle. 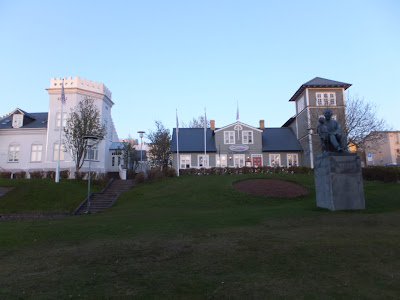 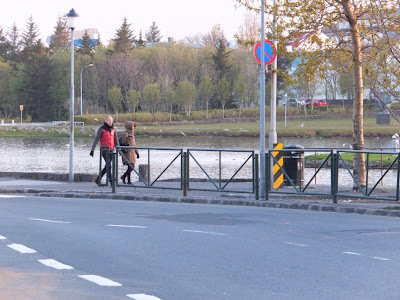 We returned to hotel and made some final preparations for our early pickup tomorrow morning for the trip to the airport.