JoAnne - I appreciate your comment and am glad you are enjoying the  blog and photos. I hope you have a wonderful cruise on February 3rd. Hopefully with the repeated sailings for this itinerary each time it is getting easier for Celebrity to deal with the visa and passport issues. Just remember that if anything goes wrong it is preferable to embrace the chaos rather than let it ruin your day. We learned that the hard way!

It seems like a missed blessing to have made it back to the ship last night. We love sea days but we are also missing the excitement of exploring on land. If the enrichment and the food were better on the Millennium I think we would be enjoying the ship more.

Our room stewards Danilo (from the Philippines) and Franklin (from Dominica) may be enjoying our days away from the ship too. They seem very relaxed and it must be little easier for them to coordinate their schedules with so many people gone on the overnights. We chatted with Franklin for a few minutes this morning. He does a great job and is very friendly and considerate.

Today the weather is cloudy and the seas are a little rough with swells at 6.5 feet. We are currently cruising at 20 knots. It is warm with a high of 87 F. We looked at the program to see if there were any events we were interested in attending. There were a couple lectures but we decided to pass.

I went to gym for a brief 25 minute run on the treadmill. The room was very busy but I only had a short wait for a machine. Unfortunately the one I was trying to use would not switch from metric to English so I had to change to another one. I always bring my earphones, seapass, scrunchie for my hair and water. Since we are in Aquaclass we get complimentary bottled water. Those in regular staterooms have to purchase it unless they brought their own from shore. I really think water should be free for everyone in the gym.

I managed to get through my workout and went back to change and go to breakfast. We are getting tired of the Oceanview so for a change we decided to have breakfast in Bistro On Five. We both ordered breakfast crepes. I also.had green tea and my mother ordered coffee.

After we ordered I went back to room to get something while the food was being prepared. When I returned my mother was having a conversation with our cheery server from Cape Town, South Africa. It really is a small world. Our server Jessermina (or something like that) before joining Celebrity lived in Florida from 2005 to 2007. In fact she worked at the hotel located across the street from where we live! She remembered me as she had seen me often walking the dogs! She asked if we still had them and I shared some photos with her. It was really funny to discover this.

We had a very nice conversation. We also discussed with her flights and the dreaded Atlanta airport as she recently flew back to join the ship in Singapore directly from South Africa. She got to avoid Atlanta and recommended we try transiting through Washington Dulles instead. We enjoyed our talk and our crepes.

While we were eating we noticed a barge going by. 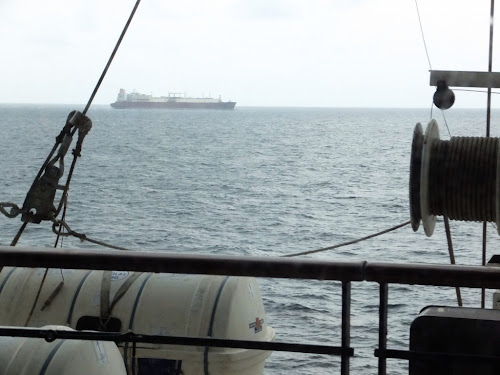 We left and went down stairs to deck 3 to speak with Jennifer, the Concierge about our arrival in Saigon tomorrow. The Christmas trees look very pretty in the lobby. 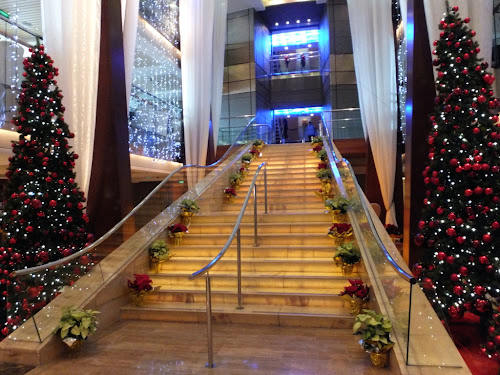 Jennifer is so delightful. We asked what time we could expect to depart the ship tomorrow in Phu My, Vietnam and she said hopefully close to 7:00 am. I also asked for some demographic info on our fellow passengers in case anyone reading the blog is interested.

The top six nationalities and number of passengers represented onboard are:

I thought there would be a lot of Australians on board. Many of them are new to Celebrity as they only recently started offering itineraries for Australia and New Zealand on Solstice, and now the Millennium for Southeast Asia, East Asia plus a transpacific.

As it was not that sunny we went back to the room and I sat out on the balcony and read one of my guide books on Hong Kong. I brought 4 of them with me. I have a tendency to obsess with travel info. This is the only place I have not pre-planned for our visit. We will be there in 8 days so I have time to prepare. It was nice sitting outside and it was not hot.

My mother went to look in the shops and purchase some of the little silk bags which are only $1.00 each. They are very cute and good for jewelry and other small objects.

It was hard to believe but a few hours later it was time to each again. We walked out the aft door and down the stairs to the terrace on Deck 10 to get to the Oceanview. The easy access from the stairs is great! Even mother will walk down. You can see the stairs in the photo below.

I went to the Asian area and got some Indian food. We decided to sit inside.


When we went back to our room it was starting get a little more overcast. It did not rain though. 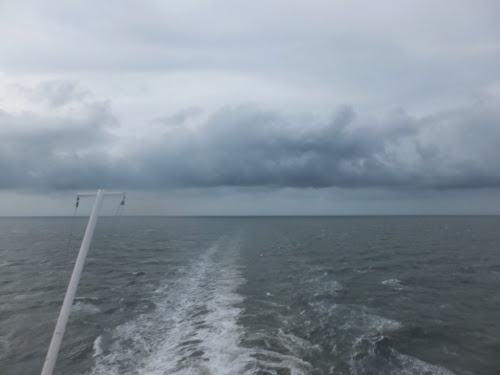 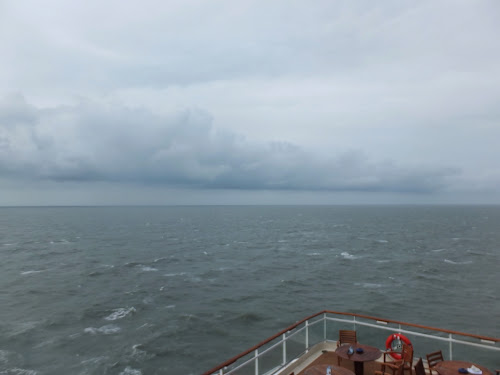 We did not do much the rest of the day except relax in the room. I read and mother took a nap. I wish we were a bit more active but it is also nice to relax from all the walking in Bangkok.

We are having dinner in Qsine tonight. This will be our first time dining at this restaurant on any Celebrity ship. There is an additional cost to dine her of $40.00 per person. During the renovation in April 2012 Qsine was added to an area on deck 11. Since we are aft on deck 11 we either have to walk outside to get there or we can go down a deck and then back up. We decided to walk outside however when you enter the restaurant this way you are in the back and need to walk to the front reception area to be seated.

We had a table more toward the reception area. The a/c seems to be separate in the front and the back. It was a little hotter in our area and we were closer to the kitchen. As many know, the Qsine menu is presented on an iPad. It is very easy to use and nice to see read a full description of what you are ordering. 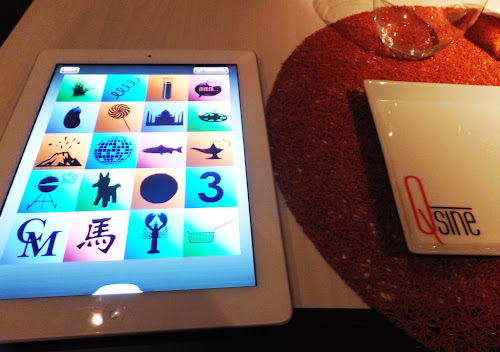 Tonight is also a smart casual night. I think that is the terminology for the dress code. There is one large table in the center of Qsine and then mostly tables for 2 or 4 people in the rest of the restaurant. The room is circular with lots of glass and provides a very nice ambiance.

We made our selections separately and then I combined them on one of the iPads. My mother likes meat so we are having the filet. In my quest to someday become vegan (not there yet!) I selected vegetarian options and seafood.

The bread is served on a little stand. 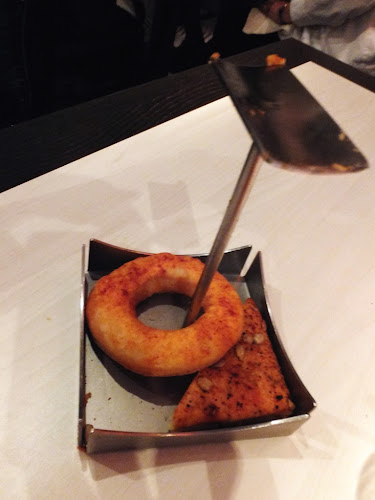 I ordered the Blue Moon cocktail. I cannot remember exactly what was in it. You mix it yourself which was pretty cool. 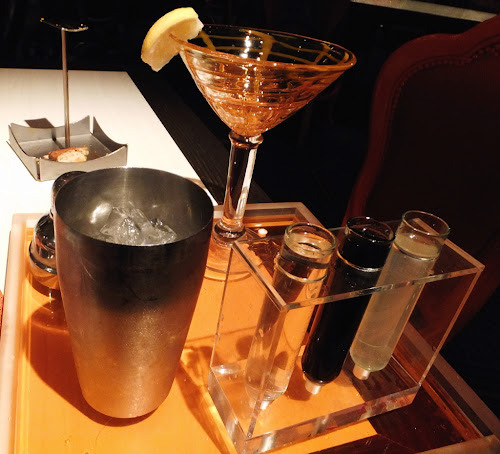 The final product below

The first item that we received were the Sushi Lollipops. There were eight of them, two of each kind. They served a soy sauce and wasabi mixture in little bottles to the side. The presentation was nice and the sushi was tasty.

We had just finished the sushi when the next course came. It is the Treseviche. There was scallop, tuna and one other one. They had little french fries on the side. It was very light and refreshing.

The next item to arrive came before we finished the cerviche. It is the Soup and Souffle. I liked the concept but this one was not a winner. I only liked one of the souffles and three cold soups were a bit much.

Our next item was more pleasing. It is the Persian kebab. It is served on a dagger like knife and they remove the pieces for you so you don't injure anyone! The chicken was very tender and spiced just right. I would definitely order it again. 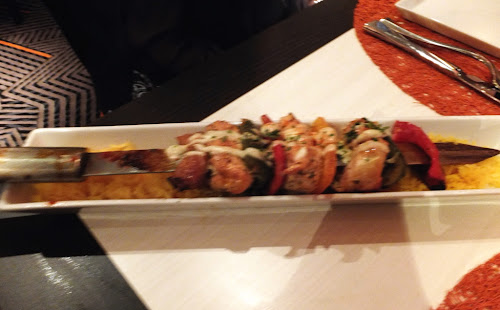 I don't usually eat much meat but strangely on this cruise I keep doing that! My mother requested the Painter's Filet Mignon. The two pieces were a good size and the dish is served with serveral condiments which are all hot including mashed potato, mushrooms, spinach, and macaroni and cheese. The steak was cooked medium rare just the way she likes it. She very much enjoyed this dish.

I think we ordered well and did not overeat or feel too stuffed. We had a short break before the dessert menu arrived. It is on a Rubik like cube. You open each area to see the selections. It was very cute!

My mother had the "Surprise dessert" which is a lava cake with ice cream and chocolate sauce. 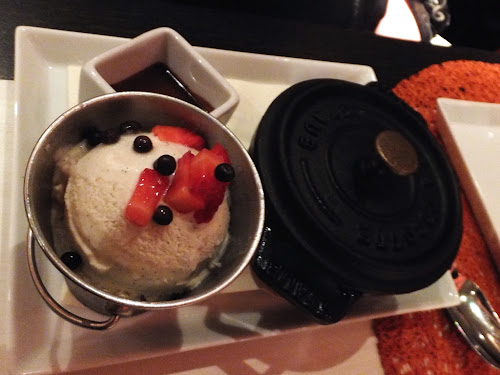 I had the Silver Bullet which is three flavors of gelato with mixes berries. I loved it!  Both the presentation and the flavor of the gelato was fantastic.

Our Qsine dinner was a resounding success! I am glad we came back to the ship after all.

Since dinner did take a little longer than usual we decided to pass on the evening entertainment. We went back to the room and found a letter from Celebrity and our landing cards for Vietnam. I was happy to see the landing card and hope that we can get our passports back tomorrow morning without much trouble.

There was also a note about collecting our passports tomorrow. Things appear to be looking up! At least the   procedures appear more well thought out and organized. We will certainly see tomorrow!

We went to bed early in preparation of our early arrival in Phu My,Vietnam tomorrow. We will be transported to Saigon in the morning and then spending the night at a hotel and returning to the ship the following day.

Posted with Blogsy
Posted by 27 Thousand Waves at 2:17 PM