We have no agenda today other than enjoying a full day at Sea. We slept pretty well and are in pretty good spirits. I discovered from our Smile Tour yesterday that private tours from the Cruise Critic Roll Call are not for us. I have always been sort of fascinated by how popular they are. When we signed up for it Celebrity had not completed posting all their shore excursions. On reflection, the Saigon On You Own would have been a better fit. In addition to being able to go at own pace and see what we want to see and for how long, Our Smile guide added little or no value. He really did not explain anything. Having our Viator guide Rose for 2 full days would have been perfect. It was a learning experience.

We went down the shore excursion desk so my mother could purchase a tour in Halong Bay that I had purchased online just for myself. It is the Countryside & Shopping tour on our second day in Halong Bay.

While we were downstairs we noticed the new Christmas decorations that were added since our absence from the ship and overnight in Saigon. 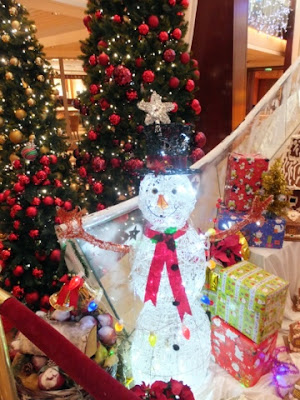 They did a very nice job. It is quite a surprise how lovely it is! 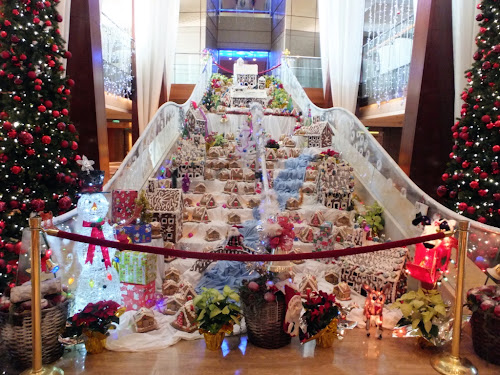 We went to have a look at the Aqua Spa Cafe for breakfast. The fruit looked good but I decided I wanted something more substantial. We walked by the Solarium on the way to head back to the Oceanview cafe. 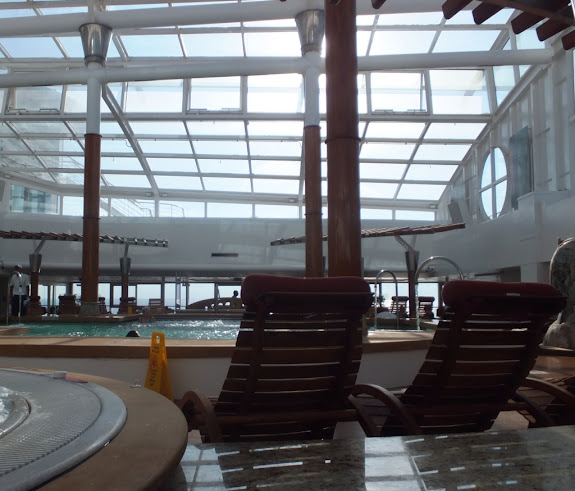 I think I may be quite confused with my choices and whether I am having breakfast or lunch. I went to the Asia station again and have papadum, curry, chutney, rice...and a chocolate croissant with smoked salmon spread. It is a rather weird combination if I say so myself! 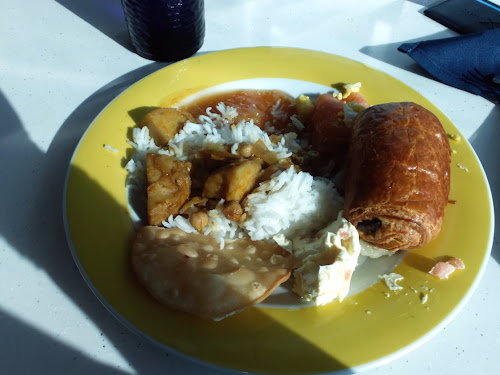 My mother had fruit and yogurt which was much more sensible.
Following our meal we returned to the room and found a nice surprise. My mother has been trying to get a bucket of ice for the champagne since we boarded the ship in Singapore. Everyday she will ask but it never came...until today. She is very happy! 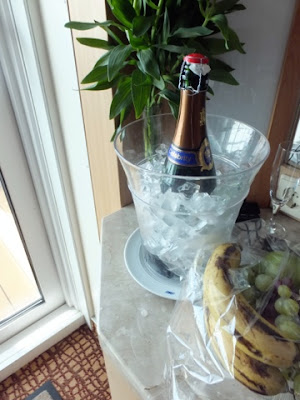 She opened it immediately and we had a mid-morning toast to relaxing day at sea. 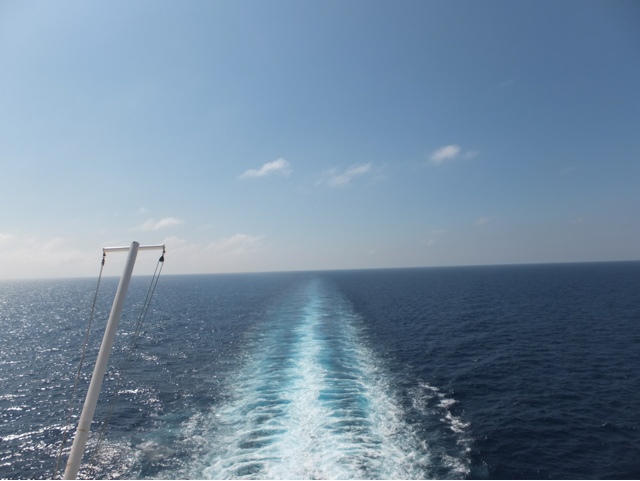 The weather is beautiful today. It is 90 degrees and the seas are very calm. After relaxing in the room for a while we decided to go take a look in the shops. I bought a shirt and a pair of sunglasses.
Because we had eaten sort of late we were not that hungry for lunch. However we soon found out that we missed the Gala Brunch in the Metropolitan which is only held once per cruise. We were disappointed! We were not the only ones who missed it in the daily program. We spoke to five other people who did not see it either.
A couple hours later we attended the Elite Tea. It was also held in the Metropolitan Dining Room. The room was completely clear of any remnants of the Gala Brunch. You had no idea that it actually occured.
I did not take my camera with me to tea. It wasn't really necessary as the tea was very average. Tea bags (not loose leaf), some pastry and scones. It was nice sitting with two people from our Saigon Smile tour and the little snack kept us going until dinner time.
After tea we both checked email and I read for a while. I even sat out on the balcony for a short time. I have noticed that some people are smoking cigarettes on the Deck 10 terrace. I read something in our room that said this was not allowed yet there are ashtrays on the tables on the starboard side. It would be nice to know what the actual policy is.
I very much like the location of our room but the smoke below can get annoying. 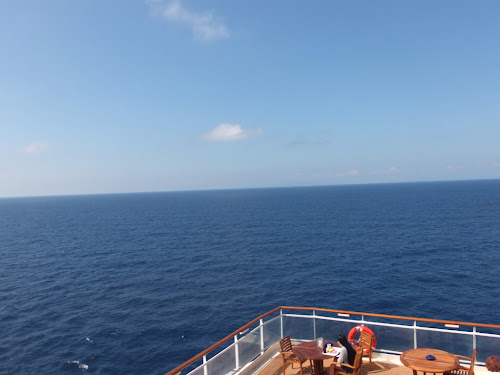 It was soon time for dinner again. I was not looking forward to Blu but we only have a couple more nights there. We watched the sunset from our balcony before heading to dinner. We are close to the coast of somewhere in south Vietnam. The TV channel showing the ship location and navigational information has never worked since we came aboard. 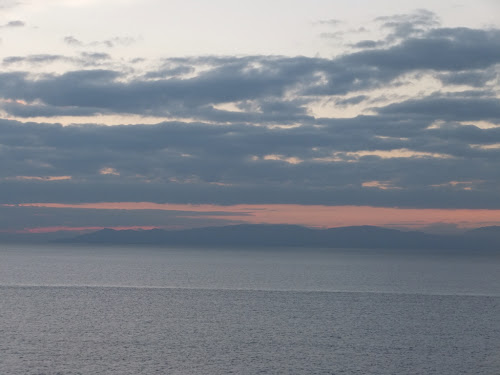 The sunsets have been very nice on this sailing. 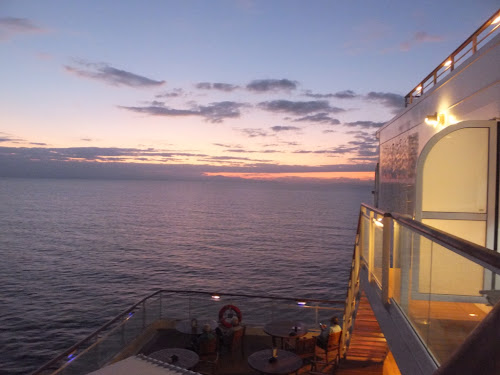 We headed down to Blu for what I hoped was an improvement from last night.
I think we have walked by Cellarmasters 3 - 4 times a day on the way to Blu or other places like the theater. 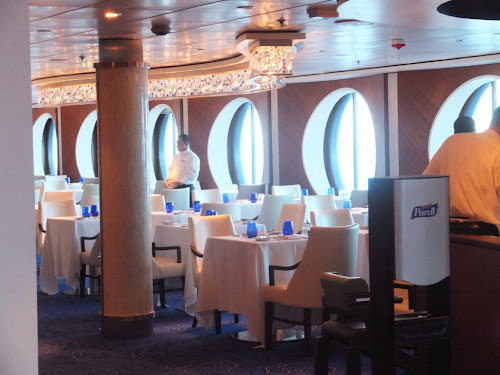 It was not that busy in Blu and we had a nice table in the center near a window. Nothing looked that appealing on the memu.
My mother selected a mushroom type ravioli for a starter. I ordered something called "shrimp on a brick". Even the description makes it sound heavy!
The mushroom was apparently good but not great. 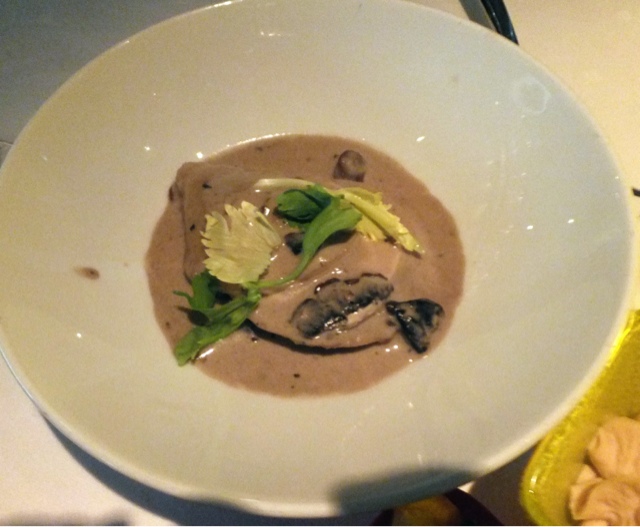 My shrimp was actually not terrible. I know that sounds so pessimistic. It was crispy and had some nice flavor.
My mother ended up having a double order of the shrimp for a main course.
I had the chicken and it was okay. It was not drowning in sauce and it was hot. 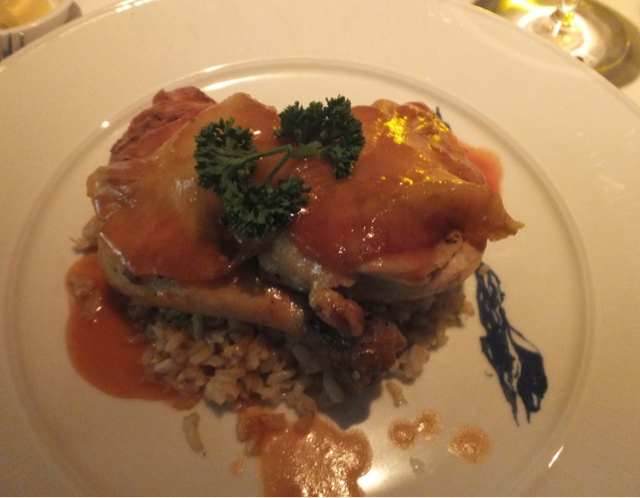 Tonight's entertainment was provided by Mario D'Andrea. We saw his act on the Solstice on our Tranatlantic in May 2011. He is a talented musican and entertaining. It was nice to see him again but I wish the show was not a complete repeat of what we saw before.
We viewed the pretty Chritsmas decorations again on the way back to our room. 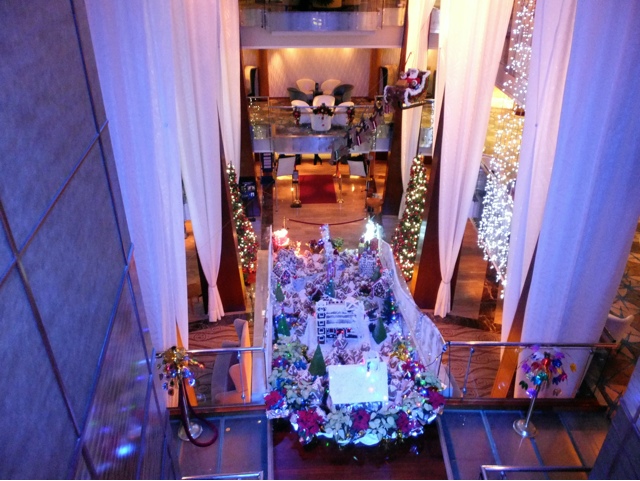 Tomorrow we will arrive in the port of Chan May for Danang. We have booked a ship tour to Hoi An. I have been looking forward to seeing Hoi An for many years.

Posted with Blogsy
Posted by 27 Thousand Waves at 9:03 PM