While we may be tempting fate with hurricane season in full swing by late August, we have booked a cruise during this time to the British Isles.

Florida has not experienced a serious hurricane since Wilma in 2005.  We evacuated to Tampa (Palm Bay) back then with our 2 dogs and 2 cats and watched the onslaught on TV throughout the night. The storm looked quite strong and we wondered while the metal storm shutters screens were flying off the Borders bookstore up the street if we would have a home to return to. About 30 hours later we departed the hotel for the 3 hour drive back and were without power for a week but were lucky. There was significant damage to some homes and condos and there were tons of trees down. So sad.

It could have been much worse though. Parts of Miami and Fort Lauderdale looked like a war zone with all the broken glass from the highrises.

While I am a little worried about a storm fortunately we will not be far away. Perhaps the most appealing aspect of a British Isles cruise is that we don't have to travel a gazillion hours to get there. It is just a short flight across the pond from the east coast. After so many days in the 90's we are definitely ready for some cooler temperatures.


We will start the journey with a pit stop in Boston for one night and then after one night at Heathrow a visit to Glasgow for a couple of days. My brother spent a year at St. Andrews while in college and I am looking forward to seeing the Scottish countryside. We will spend one night in Kent before boarding the Ocean Princess in Dover.


This is our first cruise on one of Princess smaller ships. We have experienced the "R" class on Oceania. I am not expecting the Ocean Princess to be on par with Oceania but still like the idea of a small ship with only 684 passengers. We had booked the Ocean Princess several years ago for Southeast Asia but ended up cancelling it (they had dropped Bangkok) and cruised six months later on the Diamond Princess (2009) in Alaska.

Our British Isles cruise will visit the following ports: Dover, Edinburgh, Dublin, (Milford Haven) Wales and Guernsey. We will travel in a northerly direction in contrast to the diagram below. 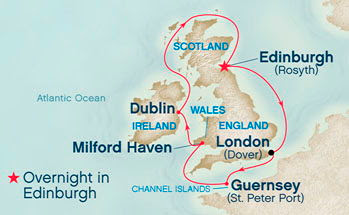 It is just an 8 day cruise but that seems about the right amount of time. I wish the itinerary included the Orkney Islands but we will try to do that another time.

This will be our 3rd Princess cruise and I have been pleasantly surprised by the enhancements to the Princess website. You still cannot book the specialty restaurants online but you can book excursions and don't have to pay for them until on the ship. I really enjoyed this feature with Crystal.

The planning process has again been fun! I first visited the UK in 1981 during the summer of the Royal Wedding between Princess Diana and Prince Charles. For this trip I want to see some places that I have missed previously. From my research I have discovered some interesting and historic places to see in Scotland & Wales.  I will be taking a camcorder with me for the first time. I am a novice but will try my best to get some good videos. Remembering to open the lens cap is the first step. If the videos are in focus and not seizure inducing I will consider that a success!

Although this vacation seemed so easy to plan, there was a surprising amount of bookings and ticket purchases required in advance of this trip. I am almost done with my punch list and just have some miscellaneous dinner reservations and transportation arrangements to make.

Below is my list of reservations and tickets that have been completed or still required:

Hoping for continued dry African dust and winds in the Atlantic to impede any tropical storms from organizing. We will see!
Posted by 27 Thousand Waves at 11:00 AM