Crossing the Pond and Overnight at Heathrow T5

We woke very early (5:00 am) on a beautiful Sunday morning. Our flight will depart Boston at 8:15 am for the UK. We had requested a 6:00 am wake up call but will not be needing it now. We got ready and 15 minutes later went downstairs for a quick breakfast. The items were your average offering of eggs, sausage, fruit, pastries. It didn't really impress me and I wasn't that hungry either. Many years ago (in the 1970's) we had breakfast at the former Hilton Logan before a dawn flight to the Caribbean. I can still remember that breakfast where everything tasted like soap! Strange how those things stay in your head! Anyway, I had a little nibble and then decided to take a walk outside while mother finished her coffee.

The Boston Bombing in April is still very fresh in everyone's mind. It is such a tragedy that this took place and so many lives were impacted. As horrific as the bombing was, I am very proud of the people of Boston and their resilience. Unfortunately this is not the only terrorist act to have transpired here. This morning I am also thinking about the tragedy of  September 11, 2001.

The events of 9/11 began in Boston with the high-jacking of the two planes which crashed into the World Trade Center. Many of the passengers were Massachusetts residents. One of those killed was my friend Sonia who was on the first plane. AA Flight 11 crashed into the North Tower at 8:46 am killing all 87 people on board. Sonia will always be remembered as being vibrant, beautiful and tenacious. I would like to think she did not go down without a fight. She was described by one of her friends as "a ballerina atop a birthday cake"!

I watched the events of 9/11 unfold from home on the television. It was after the buildings came down that evening that I learned Sonia was on one of the planes. It has been 12 years since that horrible day. Sometimes it feels like just yesterday. In 2008 a memorial was constructed at Boston's Logan Airport to commemorate those lost. I have never visited the Boston memorial before and thought now would be the prefect time. I did visit Ground Zero in NY in February 2002 which was quite sobering.

The Boston memorial is very simple in its design honoring those that lost theirs lives with its serene setting. It is fitting that the entire structure is a glass cube with the roof open to the sky as if looking up to the heavens. There are sparkling glass ornaments dangling from the ceiling. Sonia would have wanted diamonds or at least Swarovski crystals but I think it works well and she would be pleased.

The path leading up to the memorial is very understated.

I spent several minutes reading all the names. I was again reminded that today looks like a beautiful day with bright blue skies, just as it was on September 11, 2001.

The names of the crew and passengers are displayed on two glass boards with the time of hijacking on the other side. 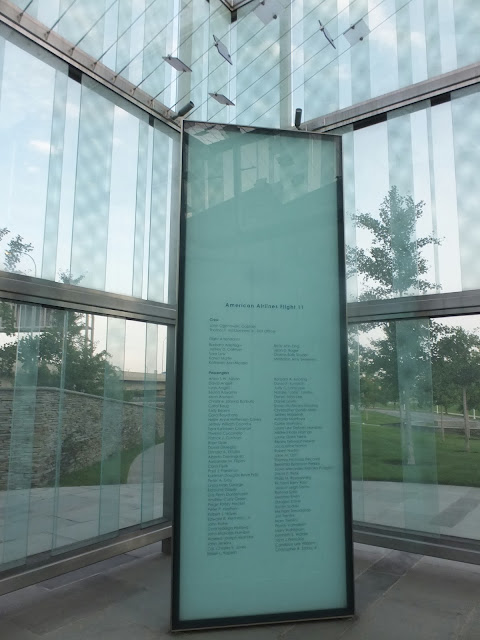 I also knew two people on United flight 175 who perished. One was just a little 5 year old girl. I then read the names of the crew and passengers from United Flight 175. This was the second plane that departed from Boston and crashed into the World Trade Center. 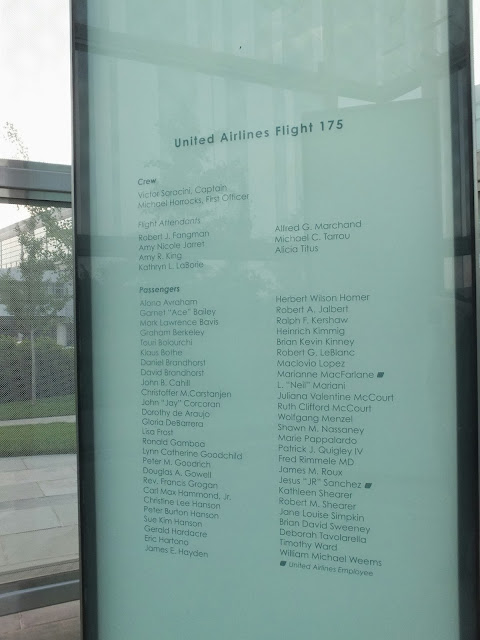 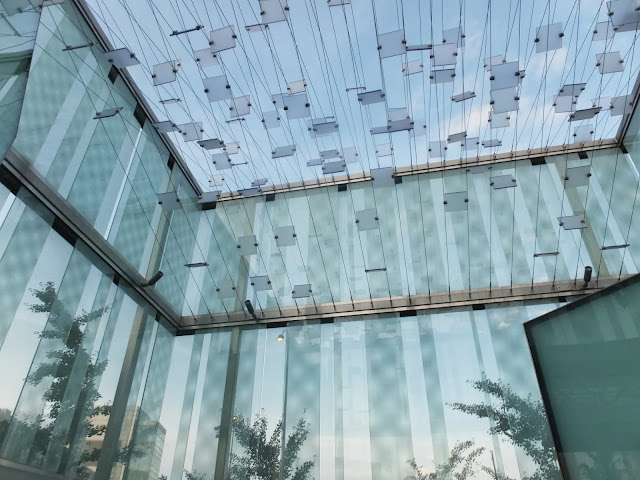 It was comforting and uplifting to pay respects to Sonia once again before leaving 'home".

I hurried back to the Hilton lobby as my mother might be getting ansy about heading over to British Airways. I forgot to give her a spare key to the room so she may be a little annoyed. As I approached the front of the hotel I noticed a lot of people waiting for the shuttle bus to the airport terminals.

I quickly went through the entrance and just as I suspected mother was standing in the lobby and not smiling. She mentioned not having a key and I apologized.

We went back up to the room, freshened up and then headed downstairs to get the Hilton Shuttle. This being Sunday I was very surprised so many people were waiting at 6:30 am to go to the airport. We could have taken a taxi or even walked but I know my mother wanted to take the bus. They come every 15 - 20 minutes but it was taking a loooong time to show up. We had already checked in online for our flight but we wondered how long the line would be for security.

The two shuttle buses finally showed up simultaneously and we were soon on our way. They stopped at Terminals A, B and C before we were dropped off at E (International). It took about 20 minutes before we reached the terminal. The taxi would have been the better option.

We didn't need to check bags since British Airways has such a great hand baggage policy. The allowance is 50 pounds per bag as long as you can lift it yourself into the overhead. We are only traveling with one carry on each and a personal item.

We went through the passport check and then through security. There was hardly any line. It was a breeze and only took about 7 minutes.  That is another benefit of taking a morning flight as there are less people as most international flights depart the US in the late afternoon and evening. We are traveling economy class this time. Since it is a day flight and only about 6 hours flying time I thought we could save the extra $ and miles and not need to fly in Business class. We are again using BA Avios (miles) for our tickets. The only down side is the configuration of economy class on the 777-200 which is 3-4-3. I booked the window and my mother booked the aisle hoping no one would sit in the middle.

After security my mother got another coffee and I purchased a water in the shop before we waited at the gate for our flight. It was not long before we boarded. We walked all the way back to row 28 and it appeared we would have the row to ourselves with no one in the middle seat. Yeah!

We left the gate a little early but were in line to take off. We didn't get to the front of the line for another 15 minutes. Then we were soon on our way!

I was sitting near the wing and had the load hum of the engine at the beginning of the flight. Once I put on my headphones it didn't bother me though.

I was happy that my IFE monitor was working and the seat was also pretty comfortable. Leg room was not great but not terrible either. In a few hours they served the meal which was...Breakfast! It was almost 11:00 am so why can't they serve lunch? Breakfast is my least favorite meal and to get two of them in one day, eew. I should have just declined. It was eggs, ham and a tomato and I decided not tot eat it.

On the plus side the movie selection on the IFE was pretty good. One of the great things of long flights is I can catch up on all the movies I have missed. I first watched a Danish movie.called "Love is all you Need" (Den Skaldede Frisor / The Bald Hairdresser) with Pierce Brosnan and Trine Dyrholm. I like the English title better! It is a romantic comedy and takes place in Denmark and the Amalfi Coast. It was excellent.

We were soon flying over England. We were due to land at 7:15 pm local time. We did end up circling at least once.


We touched down and were happy to get up and stretch our legs. I mentioned to my mother that sitting in economy wasn't terrible and that there was plenty of leg room. I turned around to see the couple who were seated behind us. Both of them were over 6 feet tall. They said it was not very comfortable! Being petite does have some advantages.

We exited the plane and made our way to immigration and customs. The line wrapped around but moved very quickly. In less than 20 minutes we were cleared and headed to our airport hotel.

Since we are flying out tomorrow morning to Scotland I decided to stay at the Sofitel at Heathrow T5. This is the same terminal where we will depart from tomorrow. Once we exited the secure area and walked past M&S Simply Food we found the elevator outside the glass doors. It was one level up and then 4 separate hallways (all carpeted) to get to the Sofitel. One of the hallways was uphill which didn't make the journey any easier. If you had a lot of luggage this would not have been fun!

At the front desk we tried to check in but the hotel did not have our reservation in their system. Yikes! It was booked using Amex points. For some reason when using the Amex points it gets changed to Orbitz. We were told Orbitz doesn't always send over the reservation. Luckily I had the printed confirmation with me and they had extra rooms. It took about 15 minutes to sort it out and we were soon given the keys to our room. By now it was around 8:30 pm. We had reconfirmed the reservation with Sofitel on the 800# before departing but in the future I would contact the hotel directly to make sure they have the reservation.

We went upstairs to drop our bags before dinner. The room was very nice for standard accommodation.

We were famished and since I had skipped the meal on the plane looking forward to dinner. They have two restaurants but only one was open on Sunday night. We had a little trouble getting seated. This was strange because there were lots of empty tables. They wanted to put us on the perimeter of the restaurant facing the lobby instead of inside. We registered our displeasure with this plan and were soon seated where we wanted to be.

We both decided to order the Indian specialties on the menu. I had the Jalfreizi Curry and my mother had the Chicken Curry. They both came with Naan, Papadrums and Basmati rice. Mine also had a yummy chutney. 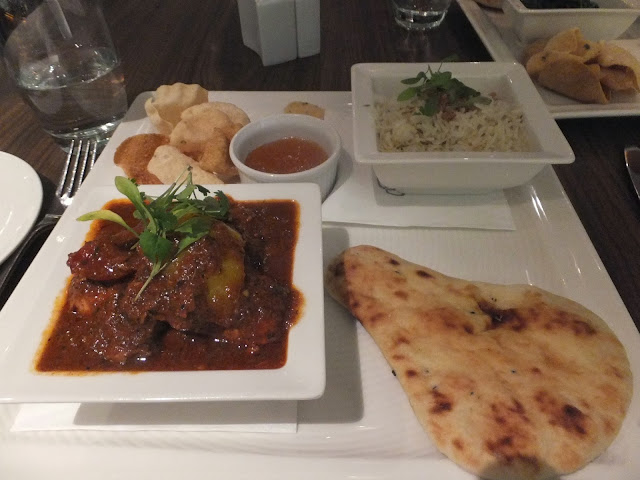 The food was very tasty. The chutney was very good too and the curry had just the right amount of spice. We considered having dessert but were tired and needed to check in for our flight before heading back to the room.

The hotel has 2 computers near reception for airline checkin. It was very easy to check in and print our boarding passes for our morning flight to Glasgow.

At around 10:00 pm we went to the room and immediately to bed. Luckily our flight isn't at the crack of dawn. Hoping for a good night sleep.
Posted by 27 Thousand Waves at 4:21 PM